36 Recommended Things To Do in the Peak District

Having spent a lot of time in the Peak District over the last 10 years, and being asked for recommendations from time to time, I've made this list of suggested Peak District activities. I haven't tried to be exhaustive, but instead focus on things I have enjoyed or that are on my own to-do list.

More activities are listed for the northern half of the Peak District, "Dark Peak", so named for its dark gritstone and moorland landscape, as opposed to the more southerly limestone and green hills of White Peak. This is simply because I've spent more time there.

To find many of the places listed, I recommend investing in Ordnance Survey maps for the appropriate areas (OL1 for Dark Peak, OL2 for White Peak).

Approach from Castleton or Edale via Hollins Cross. Or for a short option, there's a car park higher up on the western side. 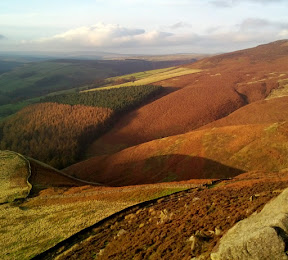 Park near the Ladybower dam (towards Bamford) and climb straight up the steep path to Win Hill summit. Or take a more gradual ascent from Hope or Alston. Fantastic views over the Dark Peak area.

Short walk with great views over the Hope Valley. Car park near marked view point on A6187 south east of Hathersage. Fantastic in late summer with purple heather everywhere.

A popular spot with an easy walk to great views from Higger Tor. The Fox House pub can be factored into a circular walk to Burbage Bridge.

The Derwent Valley Heritage Way runs along the River Derwent from Ladybower Reservoir to Derby and beyond. The Hatherage to Chatsworth stretch is particularly nice. There are fun stepping stones near Offerton (west of Hathersage).

7. Explore (get lost on) Kinder Scout

Hike up Grindsbrook Clough from Edale or follow the start of the Pennine Way up Jacob's Ladder. Find isolation amongst the peat bogs on the plateau on top. Compass advised, it's easy to get lost up there.

There are crash remains from WW2 aircraft all over the Peak District. Bleaklow has one of the larger sites near Shelf Stones (OS grid reference SK 09042 94892) where a B-29 Superfortress "Over Exposed" crashed in 1948 (photo here). There are several other sites near Bleaklow.

My post on walks accessible by public transport gives suggested routes for trips into the Peaks by bus and train.

The Dark Peak and White Peak Mountain Biking guide books are excellent. One of my favourite routes is the Ladybower Figure of 8.

Fairholmes, by the Derwent Reservoir, has a bike hire shop. A loop around the Howden Reservoir gives a nice gentle ride.

The old Midland Railway line is now 8.5 miles of gentle bike riding from Bakewell through Monsaldale. Great views along its length. The old railway tunnels add interest. Bike hire is available at Hassop, see below.

Small traditional cafe with open fire on the main road in Hope. Great retreat after a winter day out.

The old Hassop railway station next to the Monsal trail is now a bookshop and cafe. It makes a very pleasant stop if cycling the trail. There is bike rental on site, including tandems.

Delicious cakes, sandwiches and coffee with outside seating at The Square in Hathersage.

Hearty cafe food above the Outside outdoors equipment shop on the Hathersage high street.

Great selection of flavours of delicious ice cream made and sold within metres of the cows that produce the milk at Thorpe Farm. North of the A6187 between Hathersage and Bamford Station.

Thornbridge ales are now popular across the UK. They do a tour of their Bakewell brewery. More information here. 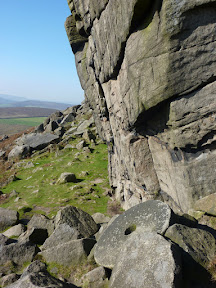 Stanage Edge, Cubar, Frogatt, The Roaches, so many places. UKClimbing.com have a nice write-up of Stanage here.

Great outdoor swimming pool. Tends to get very busy on sunny days. Heated to a nice temperature, so still pleasant on grey days.

WildSwimming.co.uk lists a few swimming spots in Peak District rivers. The best one seems to be Slippery Stones north of Howden Reservoir, though the River Derwent at Chatsworth is very popular.

The National Trust's Longshaw Estate has an introduction to geocaching with GPS equipment available for free (details here). For the more experienced geocacher, there are caches sprinkled all over the Peaks.

Canoe hire is available at Peak Pursuits on the western side of the reservoir. Near Leek.

There are several interesting scrambling routes listed on UK Scrambles. 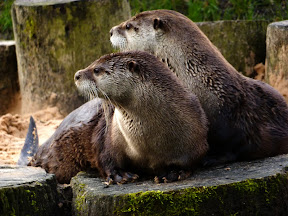 A wildlife park specialising in owls and otters, the Chestnut Centre has plenty of both, and more. Slackhall, nr Chapel en le Frith

28. Treasure Hunt across the Peaks

For grown-ups as well as kids. A different way to see the Peak District, Clues To Go make fun fact-finding treasure hunts that you can buy for a small fee and print from their website. The "Bakewell to Chapel En Le Frith" and "Matlock to Bakewell" driving routes explore the central and south Peak District respectively.

The UK's top theme park with some fantastic rollercoasters. Not quite in the Peak District, but close enough.

Once per month, take the train from Sheffield to Edale with folk musicians on board, enjoy the music on the journey and at The Rambler pub next to the station in Edale. There is now also a Manchester to Hathersage Folk Train. See www.folktrain.org.uk

The medieval manor house and gardens, Haddon Hall, dates from between the 12th and 17th centuries.

Known for its Tart (though the shops sell Bakewell Pudding which predates the Tart), Bakewell is a historic market tower on the River Wye.

A 21-mile fell race in March, starting from Grindleford and making a large loop south via Eyam and Hassop, before returning over Baslow Edge.

36. Christmas Carols in a Cave at "Devil's Arse", Castleton