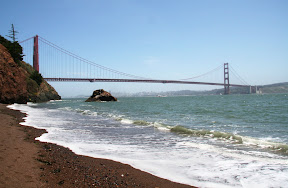 The second day of a weekend's exploration of San Francisco had me escape the city by bike and head north over the Golden Gate Bridge to the Marin Headlands. Bike and Roll bike rentals on Columbus Ave / Lombard St provided a basic but functional hybrid and I followed the Bay from Fishermans Wharf along Marine Drive to the Golden Gate Bridge.

Touristy photos duly taken, I crossed the bridge and took the underpass west beneath Highway 101 to Golden Gate Recreation Area and Battery Spencer. Great views back over the Bay to the City made the steep climb worth it, and I was tempted by the track near Battery Spencer down to Kirby Cove for a sheltered south-facing beach. Another climb back up from Kirby Cove and further west along the headland, I picked up the Coastal Trail from Conzelman Rd to Rodeo Beach. I must have looked a sight to the several mountain bikers who flew past me on the trail as I put the hybrid through its paces in my rolled-up jeans! It was a great descent though with beautiful alpine flora all around.

Rough map of my route

Back on the road, I passed the historic Nike Missile Site which once provided a last line of defense against the threat of Russian bombers and now hosts tours for the public, and continued to the south-western tip of the Marin Headlands at Point Bonita. The light-house on the peninsula is also open to visitors, but I decided it was time to head back to San Francisco before the bike shop closed. My direct route back was foiled by a west-only one-way restriction on the road east to the Golden Gate Bridge, so a detour back downhill to Rodeo Lagoon with some associated uphill thereafter was in order.

Returning over the Golden Gate Bridge on the west side, open only to cyclists and therefore much quicker than the tourist-clogged eastern Bay side, I retraced the my earlier route stopping briefly to admire the myriad of intricate kites being flown at Marina Green. By the time I returned the bike, I'd been out for about 4 hours including plenty of photo stops, and felt that it was a half-day well spent. The popular tourist cycle route over the Golden Gate Bridge and east to Sausalito is shorter and easier, but the great views and 'proper' countryside very much justified the extra distance and climbs.